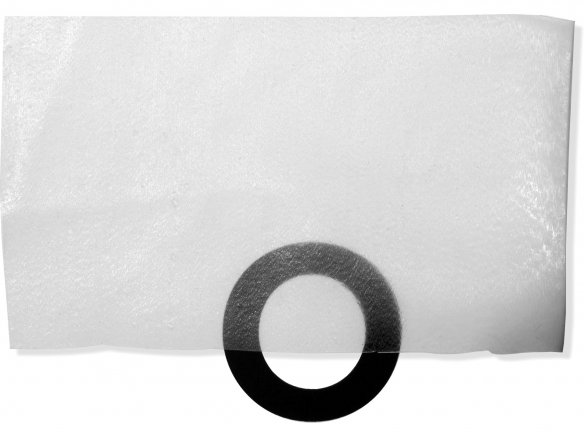 If you hold this film in your hand and pull it in every direction or try to punch a hole in it with a ballpoint pen you realize that, yes, it can be done if you are really set on it but, wow, this material is incredibly tough. You really have to put it under a severe strain in order to tear it and it is not easy to punch your finger through it either; you must use a sharpened pencil for that (and even then it does not tear right away, this brave little film!). What the hell is this steadfast film made of? Plastic? Rubber? Well, no, it is made out of a cross of both, namely, out of a thermoplastic elastomer with the abbreviation TPE that has united the advantages of both these material groups (including constant thermal mouldability - repeated usability - and elasticity). TPE displays a pronounced elasticity at any particular point, has above-average stretchability and even the worst indentations that you can make with your fingers will almost completely return to flat after a short amount of time elapses.

What can you do with this film? We asked that question ourselves but quickly came to the conclusion that we would add this material to our product assortment even if we weren’t exactly sure what is was for. TPE has a whole list of good attributes: it is latex-free, meaning it won’t bother allergy sufferers – which is why it is often used in the field of medicine as an OP body cover or as the elastic “housing” for an endoscopic camera (ouch!). In addition, the TPE that we carry is low in odour (compared to many types of rubber), non-toxic, and that’s not all: it is also food safe in compliance with all FDA and EU standards. The fact that you can actually sew this film means that you could make clothes that are not harmful to the skin or wrap asymmetrical, crooked, pointed lampshades or sew or heat-seal it to containers, bags or bowls because it is, as already mentioned, thermoplastic. This material, however, does not take well to gluing; gluing it may not be as hopeless an endeavour as it is with Silicone sheets but you can only achieve a very limited bond even when using Pattex transparent, super glue, spray adhesives or any other adhesive.

The colourless transparent TPE film has a textured, slightly rough surface that is a result of production processes that serve to increase the release properties of the material. You should note that it is “contact” transparent, which means that when it is in direct contact with a substrate any lettering, for example, can be easily read through the film but when there is some space separating the film from the substrate it will have a milky transparency. You should also notice that the transparency increases as you increase the tension by stretching the film.