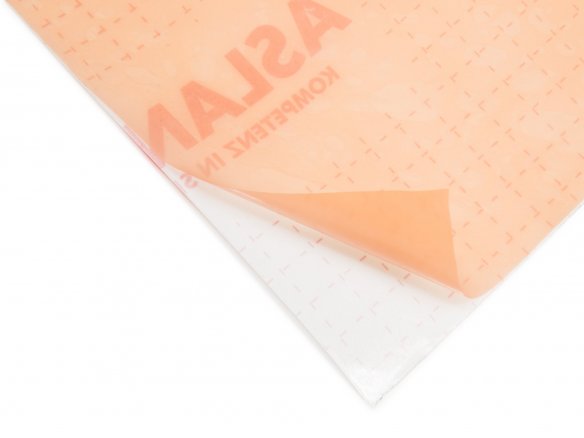 transparent, colourless, acid-free, calendered monomeric plasticised PVC, th = 0.07 mm, solvent-free, ph neutral acrylate adhesive, one side with permanent adhesive, one side removable, both sides lined with silicone paper and orange LDPE film, inner ø of the roll tube is 50 mm (for 50 m roll it is 76 mm)

The two sides of the double-sided adhesive film DK4 from the Aslan company have differing adhesive strengths. The side with the silicone release liner has an adhesive with delayed initial stickiness and therefore makes adjustments possible when applying it. The side with the orange coloured release liner has a special adhesive which, even after an extended period of time, allows the film to be easily removed from all smooth surfaces.

In addition to its customary uses (removable applications or creating self-adhesive placards, maps, blueprints, drawings, advertisements, etc.) this film, because of the removable adhesive on its one side, is also good for use in affixing materials to milling tables.

When working with this product, the temperature should be at least 15 °C. Once the adhesive has set, this film is temperature resistant from -30 °C to +80 °C.

5 Variants
reset filters
↺
Width
Note
This is Modulor
Modulor Newsletter
✖
Modulor uses cookies to provide you with the best experience on our website. By continuing to browse the site you are agreeing to our use of cookies.    More information
Welcome to Modulor
WITH or WITHOUT VAT?
As a business customer, see net prices - or as an individual customer, see all prices including sales tax.
Business customer
Price with sales tax
Private customer
with VAT
You can change your choice at the top of the page at any time in the future.