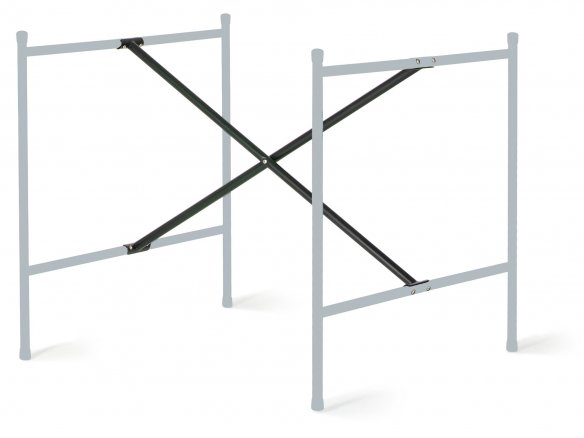 The E2 table frame and accessories

Please select the height and width of the side frames that you want, and then choose from among the cross rails the length that you want the table to be. The side frames and the cross rails can be used in any combination to make table frames of different sizes and heights. The smallest possible table frame is 660 x 600 x 1000 mm (h x depth x l), the  largest is  720 x 780 x 1350 mm. You can also choose whether you want to attach (with screws) the cross rails in the middle of the side frames or offset to one side. The latter variation allows for more leg room under the table when it is being used as a desk (from just one side).

Please keep in mind when you are assembling the frame with the offset cross rails that they cannot be placed anywhere you want because the holes in the side frames are located in specific spots, which limits your choices.

E2 table frames are very sturdy and are able to reliably handle tabletops up to a weight of 50 kilograms. Normally, the tabletop will just lie on top of the hooded plugs on the four legs of the side frames and overlap all the way around. That presents no problems if the tabletop is heavy enough that it won´t slip or slide out of place. If you would be happier with a more secure method, you can place the table on special anti-slip rubber stoppers or screw it into place using the tabletop mounts or, if height adjusters are part of your system, the head plate that the adjusters include. If the table is to be placed on an uneven floor, the adjustable legs should suffice to even it out.

If the table is to be used as a drawing or art table, the rather low 660 mm height of the original version is probably just right because the rear part of the table can be more easily reached. For use as a writing or dining table it is advisable to employ the side frames with height adjusters to raise it higher. Or you can just order the 720 mm side frames from the outset because when topped with a 30 mm thick tabletop, the really comfortable height of 750 mm is attained. When rubber castors are being used with the table, its height is about 75 mm higher - which means that even with the fairly low 660 mm side frames an agreeable height is achieved.

The tabletop can be slanted or angled through a few different methods: the easiest is to place the front edge of the tabletop on the horizontal rail of the side frame. This produces a 2 degree slant that can be increased to up to 19 degrees by employing additional height adjusters. If you want to put the table at a slant with height adjusters without putting the tabletop on the horizontal rails of the side frame you should note that after a certain amount of slant it will be necessary to employ the fasteners for slanted tabletops because otherwise it will just slide off! In doing this, the rear plates of the adjusters are attached to the tabletop with screws while the top is allowed to just rest on the adjuster´s front plates. Please note that it is not possible to create a slanted table using the heigt adjusters with head plates.

History of the E2 table frame

1953 Egon Eiermann designs a metal table frame for use in art education rooms in schools and architectural offices. These were then manufactured by the company Max Meier as well as at the Karlsruhe Technical University. The frame consists of two side pieces joined to one another by cross bars that are permanently welded into place to form a bend-proof table frame. A basic wooden panel that is simply lain on top of the joined side pieces serves as the working substrate.

1965: Klaus Brunner, an assistant of Egon Eiermann, was inspired through his need to pick up and move to the city of Freiburg to come up with a transportable version of the table frame. Adam Wieland, who was the director of the metal workshop at the Karlsruhe TU since beginning in 1963, then made additional changes to Egon Eiermann´s table frame by making the diagonally arranged cross struts sit in a more upright position and made them so that they could be removed (not welded). Thus was the E2 born. A few days later, Egon Eiermann checked out the new design and was enthusiastic about it! In that same year, Adam Wieland began producing the table frames which eventually over the next 45 years became established as the standard table for architects and designers.

1995: While the welded version of the Egon Eiermann table frame disappeared from the marketplace in the 1980s, the popularity of Adam Wieland´s E2 version continued to grow. For many of his admirers the E2 became known as the "Eiermanntisch" (Eiermann table). During these years, a furniture dealer acquired the rights for the term "Egon Eiermann" and the corresponding products. He then made modifications to the original 1953 table frame and brought his version to market. It, too, could be dismantled and included tube diameters measured in metric units as well as various accessories like height adjusters and a cable duct, all of which had already been developed by Adam Wieland. Because Adam Wieland´s contribution of having made the table frame disassemblable was found to be an independent and significant advancement of the original, the production and marketing rights remained with him despite the fact that the rights to the name "Eiermann" had been sold in 1995.

2009: the product name "E2" was created and registered with the German Patent Office as a trademark.

12 Variants
reset filters
↺
Length
Color Group
Note
Modulor Newsletter
This is Modulor
✖
Modulor uses cookies to provide you with the best experience on our website. By continuing to browse the site you are agreeing to our use of cookies.    More information
Welcome to Modulor
WITH or WITHOUT VAT?
As a business customer, see net prices - or as an individual customer, see all prices including sales tax.
Business customer
Price with sales tax
Private customer
with VAT
You can change your choice at the top of the page at any time in the future.